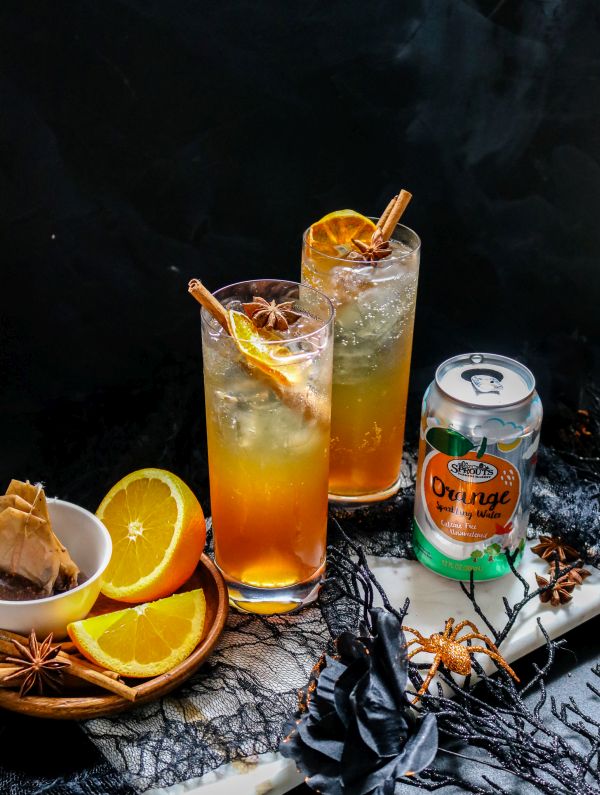 This recipe was sponsored by Sprouts Farmers Market. All opinions are my own, thank you for your support for the brands that help make this website possible!

As the weather gets cooler, I find myself gravitating back towards iconic fall flavors like (yes…I’m basic) pumpkin spice, apple cider, and of course anything chai flavored. I’m actually drinking a dirty chai latte as a I write this actually… Chai spice was calling my name today and it never disappoints.

As we embark on the fall season, I was asked by my friends over at Sprouts Farmers Market to create a seasonal mocktail recipe that would be fun and festive for this time of year. As much as I love warm drinks this time of year, I also loved the idea of doing a riff off of a class ice chai tea as well. I wanted to incorporate their Sprouts brand sparkling water into this drink to take a regular iced tea up a few notches!

Get the full recipe below for this refreshing drink and read through for a few helpful tips and tricks… to making the perfect treat (see what I did there)!

To make this drink (with or without alcohol), you need to separate it into three different parts. The first is to make and chill the tea, create a cinnamon simple syrup (this really emphasizes those chai flavors and adds the perfect amount of sweetness to the drink), and then adding the orange notes with both fresh juice and the orange sparkling water.

To brew the tea for this iced drink, you want the tea to be slightly more concentrated. I prefer a ration of one cup of water to one tea bag. Choose your favorite Vanilla Chai Tea bags and boil four cups of water in a pot or kettle. Remove it from the heat once it hits boiling and let it sit for about 30 sec before adding the bags.

Steep the four tea bags until the tea comes to room temperature. Discard the bags at this point and move the tea to the fridge. I’ll either chill it directly in the pot or move it to the pitcher for the time being. It helps to have it cold when building this iced drink, so plan ahead for this process!

Now, for all my keto friends that are looking to keep this low carb… You can check out my whole post on how to make keto simple syrup. Keto simple syrup is made similarly to regular simple syrups, but you do need to use the right low carb sweetener (so make sure to check this out first before continuing on).

No matter which method (keto or standard) you use to make your simple syrup, dissolve your sweetener into the boiling water, simmer until it slightly thickens, and then remove it from the heat. Steep the cinnamon sticks (do this while the tea is steeping) and allow the mixture to cool on the counter and then store in a jar. I like to make a little extra to also pair with this Apple Cider Whiskey Smash Cocktail too!

Once the tea and syrup are cool, you can assemble this in a pitcher. In a tall pitcher, add in the cinnamon simple syrup, chilled chai tea, and the fresh squeezed orange juice. Stir until well combined.

What makes this different from a standard iced tea (and more of a mocktail) is the addition of sparkling water. Sprouts brand of orange sparkling water is one of my favorite go-to flavors. I find it so refreshing and I felt the orange notes in this drink compliment the vanilla chai and cinnamon nicely. Reserve the sparkling water for when you serve the drink in the glass!

I prefer shopping at Sprouts for their Sparkling water, because it’s often on sale and being on a keto or low carb diet, I find myself looking for better alternatives to soda or other sugar based drinks! If you haven’t tried this brand of soda water, try their lemon or lime juice flavors too!

I prefer to serve this in a taller glass (a Collins glass). The type of glass you use in when serving different drinks (especially those with sparkling water) actually makes a difference! Pour one cup of the tea mixture into a glass over ice, add in a spirit if desired (whiskey or bourbon would pair really well here but vodka would be fine too), and then top the drink with the orange sparkling water.

Serve the drink with an orange slice, a cinnamon stick, and a star anise pod if desired. Pop in a reusable or paper straw and cheers with your friends and family as you enjoy all the fall season has to offer!

Share:
Welcome to my virtual classroom! As a culinary arts teacher for seven years, I have truly developed a passion for teaching, learning, and cooking. The recipes you will find here are healthier, low carb variations of classic comfort foods that soothe the soul. I also love a good (keto) cocktail and never believe in drinking alone! Stop by, say hi, and stay a while. I hope you’ll learn a little something while you’re here. Bon Appeteach!
Learn More
Skip to Recipe